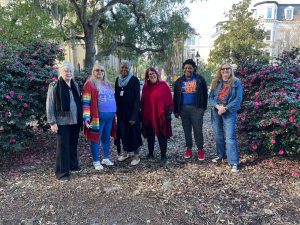 Reprinted from The Savannahian, a digital alt-weekly newspaper that was launched in 2020 with the common goal of furthering the cause for independent and locally-centric news and storytelling in Savannah, GA.

WALKING INTO Calhoun Square, I felt a sense of peace about the gratitude circle I was about to participate in.

Every Wednesday until May 2022, Joanne Morton will host a gratitude circle in a different square in Savannah.

Since the gratitude circles were going to be held in historic squares and I am originally from Long Island, New York, I felt it was a perfect opportunity to learn more about the history of the land I had settled on. Where were my feet treading and whose feet tread upon that ground before me? It was suddenly an important question as I prepared to offer my gratitude on a piece of land named after a historical figure.

So I did some research. Who was John C. Calhoun and what happened on that land? What had those oak trees witnessed?

As it turned out, John C. Calhoun served as Vice President of the United States from 1825-1832. He was a slave-owner from South Carolina. After his death he also had a square named for him in Savannah, where I would later contemplate his life and stand upon in 2021.

As far as the earth was concerned, beneath my feet rested the bodies of many unidentified African American people who had been mass buried in that square. Some years ago the identifiable bodies had been moved to Laurel Grove Cemetery, but there were still those who had been left behind. I left an offering in the square in memory of those souls lost in time and forgotten there, and I waited for Joanne
to meet me and begin her circle.

As I waited, I contemplated the indignity of a square where the bodies of many African Americans lay to rest, being named after a man who had enslaved the African American people. I decided that when I expressed my gratitude I would include my gratitude for the lives of the people who had lived before me and who had remains in the earth beneath Calhoun Square. There is much to be grateful for, but I am also grateful for change. Sometimes change must come from the hearts of people before we can see it in the physical world.

Right on time, but just early enough, Joanne Morton showed up as several people had started to gather in the square. Some of us had already introduced ourselves. Joanne and I spoke about her passion for art and community a bit before we began the gratitude circle.

Joanne started the gratitude circles in 2013 after she moved to Savannah from New York City. One of the women who joined us that day, Nichelle Stephens, knew Joanne back from the time Joanne had been living in New York City and they met in “The Fucking Cool Women Society.” Both coincidentally ended up settling in Savannah later in their lives and reuniting. After some time in Savannah and hosting the gratitude circles until 2017, Joanne began focusing on some other projects and put the circles on hold.

Then, something called to her. After a spiritual experience Joanne knew that she wanted to bring the gratitude circles back again. She knew that at this time in 2021, we needed to spread the magic of gratitude, and the love that comes with it. We as humans needed the passion to make more positive energy for the world we lived in. Wednesday, December 1, 2021 was the perfect day.

We assembled as seven women on a Wednesday. We were of different race and sexuality, hailing from different parts of the country. Joanne led the circle as we all held hands (COVID precautions had been taken into account and addressed) and went around individually, formally introduced ourselves and shared the gratitude we had in our lives. During my time I expressed my gratitude for the humans buried beneath us and the lives they lost. I expressed my gratitude for my family. Many were grateful to even be alive.

Joanne led us through a meditation and visualization where our love and gratitude passed from one person to the next and then spiraled out through Savannah, and then all the lands all over the world. I envisioned a purple pixie dust swirling around all the people on the planet and showing them how grateful I was that we all exist here together, and they are not alone.

I felt grateful after participating in the gratitude circle. That in itself told me that it is a magic that works instantly. I was grateful for the people I had met, the knowledge I had gained, the beautiful experience of raising positive energy, and the sense of community I saw as we all came together to do something magical for the world. Community is something that is very important to Joanne.

The Manifesting Mobile is a large-scale hanging mobile where Joanne asks people to share their ideas and artistic concepts of what a healthy planet looks like on a piece of recycled cardboard the size of a CD. These pieces of art can come from anyone in the Savannah community or elsewhere to hang from the mobile as a visual art piece that represents healthy people, a healthy planet, and healthy prosperity. There is more information about that on Joanne’s website or social media pages.

Bringing back the gratitude circles also gives Joanne a platform to speak about her art in person and move more people to the action of pursuing change for the better through their passions and love, and through the magic of the universe that we so often forget to acknowledge. That mystical part of life that even begets the question of “Why?”out of the greatest of skeptics and scientists.

“It doesn’t matter what you’re feeling. It’s real. So feel it,” Joanne explained as she expressed her vision of a positive, loving, and nurturing community. “It doesn’t matter who you have sex with, what color you are, who you vote for, what kind of job you have, where you live; we all share that same inner belief that we all deserve love…in gratitude circles none of that other stuff matters. All that matters is that you have a grateful heart, and that you show up. When you show up with a grateful heart all that other bullshit goes away. The more we can talk about that, and the more we can share that, we can really be part of this new collective consciousness and we can shift and change the world.”

One of the people who participated in the circle named Ernestine Murray (The Water Lady) spoke about her experience with Joanne’s art and manifestation. “When she started the gratitude circle I said, ‘Oh, I gotta be a part of that as well.’ Doing the gratitude circle once a week made you think about stuff all the time that you’re grateful for. We had really good sessions in the squares, and that gave you an opportunity to visit the squares and learn about them .It’s just been great, and I’m so happy that she brought it back. So, here I am.”

“I am not a dead butterfly, you cannot pin me to a board,” Margie Standard says, though there is nothing standard about her as she herself told me. An astute observation on her part, for she was an interesting and unique individual.

This past Wednesday I manifested the magic of gratitude and love and spread it all over the world. I was able to have that experience because I was invited by Joanne Morton, and I thank her for leading a beautifully eclectic and inclusive circle where we all envisioned our own energy changing the world.

Love changes everything. Doesn’t it?